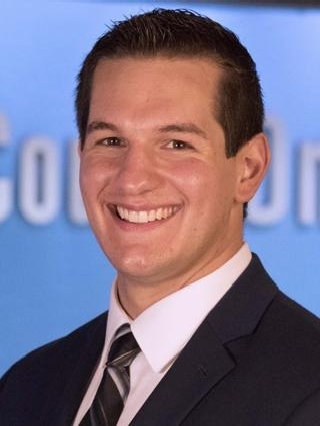 Ryan grew up in Allison Park, a beautiful suburb of Pittsburgh, PA about 10 miles north of downtown. He graduated from Deer Lakes High School and went on to Allegheny College pursuing a degree in communication arts with a minor in economics. He also played basketball, lettering each year, and earned the distinction of captain his senior season. Ryan finished his career 20th on the school’s all-time scoring list.

Before coming to WJAC, Ryan got his first taste of the business as a sports intern with KDKA-TV 2 in the summer of 2013, when he covered the Pittsburgh Pirates and Pittsburgh Penguins on their respective runs to the playoffs, as well as Pittsburgh Steelers training camp in Latrobe. After graduating, Ryan started his career in Steubenville, OH, at WTOV-9 covering sports in the Ohio Valley for three years, before having the opportunity to be promoted to WJAC. Ryan took over as sports director in April 2018, less than a year after coming to WJAC as a weekend anchor and sports reporter.

In his free time Ryan enjoys playing basketball, working out, and cheering on his favorite Pittsburgh sports teams. His hobbies include playing golf, spending time with friends, and traveling the state of Pennsylvania on fishing trips with his father. Ryan loves spending time with his family, and attributes all of the success he has had to the unconditional support they have given him along the way. Ryan couldn’t be happier to be covering sports for WJAC and looks forward to the opportunity it gives him to do what he loves each and every day.